The purpose of the Basketball WA State Performance Program is to identify the State’s most talented athletes and create an intensive training environment that will “develop and prepare young basketball athletes to represent WA” at an Australian Junior Championship.

Basketball WA believes that the establishment of a direct pathway for athletes in the SPP into the State Team Program will improve the quality of State Team performance into the future.

The 2023 State Team squads will be selected from athletes attending the SPP. Therefore, players wishing to represent WA at an Australian Junior Championship will be required to participate in the SPP. A combined SPP/State team trials will be held to form squads.

Following the initial trial phase, squads will be selected with top age and bottom age players in the U16 and U18 age groups to provide a continual development focus. The program will provide players with skills, competition and mental improvement that are required to perform at a high level at an Australian Junior Championships. Once the final State teams have been selected, players will train with their State team coach in preparation for the Australian Junior Championships.

The Basketball WA High Performance Manager may make an exception for a player to only attend the State Team part of the program in special circumstances that support the best outcome for the State Program. 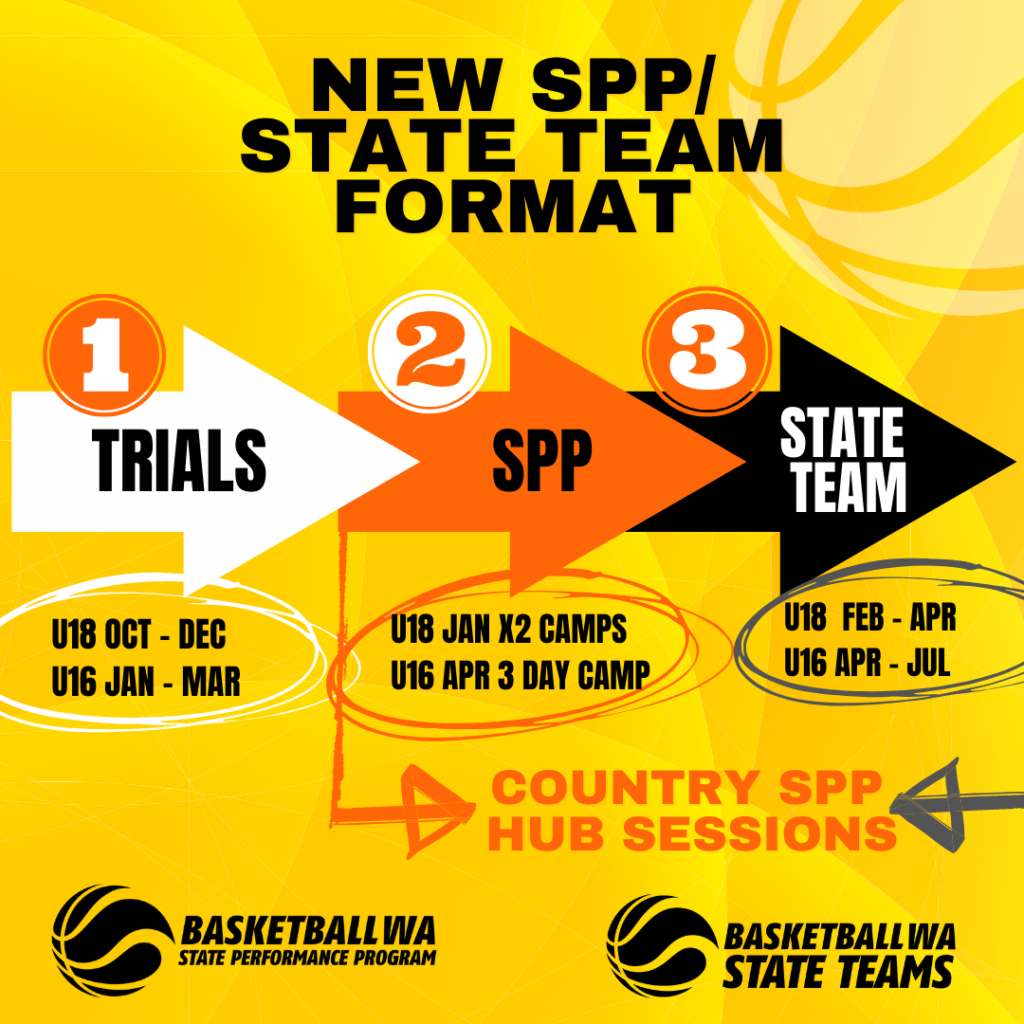 WHAT IS THE COMMITMENT REQUIRED FROM SPP SQUAD MEMBERS?

COST TO BE IN THE SPP

A levy of $405 per athlete applies for involvement in the SPP which off-sets the costs of the program (which includes camp costs, training uniforms, strength and conditioning programs). This fee is only payable once athletes have been selected to the SPP (following the trials).

Can I be selected in a State team without participating in the SPP
All State team players will be expected to be involved in the SPP unless granted special consideration by the Basketball WA High Performance Manager.

What happens if I don’t want to meet all of the requirements of the new SSP (such as attend all camps and SPP sessions)?
It is highly desirable that athletes meet all requirements of the new SPP to give themselves the best chance of being selected to their respective State Squad. Exemptions from training sessions and any SPP Camps may be granted by the Basketball WA High Performance Manager under special circumstances only.

What happens if I am selected to the SPP following the trials and then am cut from the State Squad at a later date ?
Athletes who aren’t selected in the finalised state team, will be reserves and will continue on with all SPP related program until the program ends

How does the structure affect Country athletes?
Country operates the same as Metro. The delivery of some of the requirements may differ slightly (such as the set-up of the SPP home training programs).

What happens if my family is struggling financially and find it difficult to play the SPP levy?
There is a cost involved to be in the SPP. Likewise, there will be a greater cost involved to those athletes who are successful in making a State Team. Any individuals who suffer from financial hardships should contact the Basketball WA High Performance Manager so that their situation may be accessed.